Why teachers should consider “friending” their students

Earlier this week, I posted a Facebook link to a New York Times story on the Ohio school shooting: 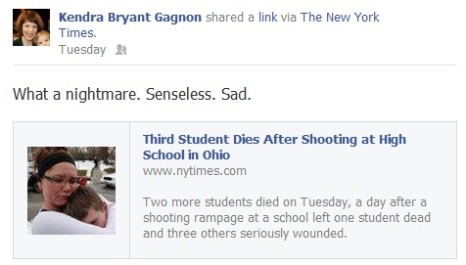 The post generated some interesting discussion on bullying and teacher-student interactions, but one comment in particular really got me thinking.  One of my friends posted a link to an article describing a disturbing Facebook post written by shooter TJ Lane back in December, ending with the phrase, “Die, all of you.”  My friend commented that the shooting “maybe could have been prevented if the grown-ups paid attention to social media.”

Before I go on, I want to point out that it is easy to say – in hindsight – that this tragedy could have been prevented if someone had been “paying attention.”  For the most part, I think we all make the best decisions we can with the information we have.  Sometimes we don’t do enough, do nothing when we should have done something, or do what turns out to have been the wrong thing altogether.  My heart goes out to all the students, teachers, and families who have experienced this nightmare, and I can only imagine the innumerable conversations among them beginning with the words “If only I would have….”  I myself have experienced a situation with a tragic and irreversible result, and I understand the depth of that kind of  guilt.  I am heartbroken for all involved and – simply put – no one is to blame except for one very disturbed young man who did something to ruin the lives of many, including himself.

But I do think this tragedy and the events leading up to it illustrate the need to re-examine the conventional wisdom that teachers should never “friend” their students.  Last summer, my home state of Missouri passed a law preventing teacher-student “friendships” on social networking sites.  The ill-thought-out law was designed to “protect” students from inappropriate interactions with teachers, and was repealed a few months later.  I think what happened in Missouri is a perfect example of how social media (and teachers for that matter) tend to get demonized, usually by people who’ve never logged onto Facebook themselves.  It is easy to fear what you don’t understand, and I’m sure Missouri lawmakers thought that “protecting the children” would be popular with voters.  But we have to realize that social media isn’t a whole new world of communication.  It is simply another way to communicate.  A teacher who would interact inappropriately with a student (and – despite what the media would have us believe – I don’t think there are many) is not going to be deterred by a law preventing them from “friending” a student.  And, frankly, there are a lot of positive interactions that could occur between students and teachers on Facebook and other social networking sites (not to mention the growing body of evidence, including some of my own work, that social media can actually be an effective part of education).  When teachers aren’t allowed to “friend” students – whether because of State law or simply an unwritten “rule” dictating that it’s inappropriate or creepy – there are missed opportunities for meaningful interactions in a space where kids today are doing a whole lot of interacting.  And what about the student like TJ Lane, who uses social media as a place to write things he can’t figure out how to say out loud?  As a place to cry for help?  If no one’s listening, then no one can reach out.  No one can intervene.  Nothing can change for TJ.  And we saw the absolute worst outcome from a situation like that this week in Ohio.

I don’t mean to pretend that there aren’t serious considerations for teachers who “friend” their students.  As an educator myself, I’ve done a lot of soul-searching on the subject (although, admittedly, it’s a bit less messy for me since I teach graduate students who are all adults).  I’ve come to the conclusion that I’m okay with “friending” my students and former students, but I don’t ever make the request.  I understand the privacy settings on all my social networks, and I use the lists feature on Facebook.  I monitor my accounts closely.  I don’t pose with alcohol and never post or allow myself to be tagged in any picture that could be viewed as questionable or suggestive.  I am certainly not afraid to share my personality and am not shy about my parenting philosophies and political leanings, but I strive to also post content that is relevant to who I am as a professional.  I abide by the “front door” rule: if I wouldn’t post it on my front door, I won’t post it to social media.  By letting my students into my social media “world,” I hope to serve as an example of how social media can be used to develop an online identity that is honest yet thoughtful, and that matches who you are and how you want others to see you.  Social media can help you meet people, brand yourself, learn new things, make connections, and get ahead.  And that’s probably the most important lesson that can be taught to a student on Facebook.

Social media are the way the next generation of students are communicating, like it or not.  A lot of bullying and cries for help are now occurring in the form of posts, tags, tweets, and uploads.  We are inundated with stories of young people posting inappropriate and damaging things on social media, and I’m convinced we have to do more than just “pay attention.”  We have to act when we see something troublesome and teach kids how to use social media thoughtfully and responsibly.  And I’m not sure how to do that without us grown-ups taking a deep breath and hitting the “accept friend request” button.

One response to “Why teachers should consider “friending” their students” 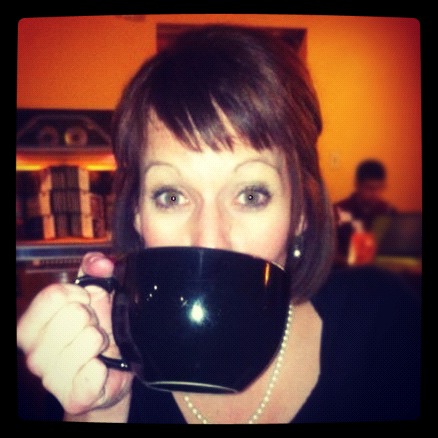